I originally posted this at http://bdgregg.blogspot.com/2006/12/dtracetoolkit-ver-0.99.html.

I've released DTraceToolkit ver 0.99 – a major release. If you haven't encountered it before, the DTraceToolkit is a collection of opensource scripts for:

The DTraceToolkit isn't Sun's standard set of Solaris performance tools, or, everything that DTrace can do. It is a handy collection of documented and tested DTrace tools that are useful in most situations. It's certainly not a substitute for learning DTrace properly and writing your own custom scripts, although it should help you do that by providing working examples of code. It is certainly better than not using DTrace at all, if you didn't have the time to learn DTrace.

18 months ago I released version 0.96 of the DTraceToolkit. The Bin directory, which contains symlinks to all the scripts, looked like this:

Click for a larger image. That collection of scripts provides various views of system behaviour and of the interaction of applications with the system. A general theme, if there was one, was that of easy system observability: illuminating system internals that were either difficult or impossible to see before. There were 104 scripts in that release, although that is just the tip of an iceberg.

In the last 18 months, DTrace has been expanding its horizons through the creation of numerous new DTrace providers. There are now providers for Java, JavaScript, Perl, Python, Php, Ruby, Shell and Tcl, and more on the way. The iceberg of system observability is now just one in a field of icebergs, with more rising above the surface as time goes by. It's about time the DTraceToolkit was updated to reflect the trajectory of DTrace itself, which isn't just about system observability, it is the observability of life, the universe, and everything.

This new version of the DTraceToolkit does has a theme – that of programing language visibility – which covers several of the new DTrace providers that now exist. The Bin directory of the toolkit now contains 230 scripts, and looks like: 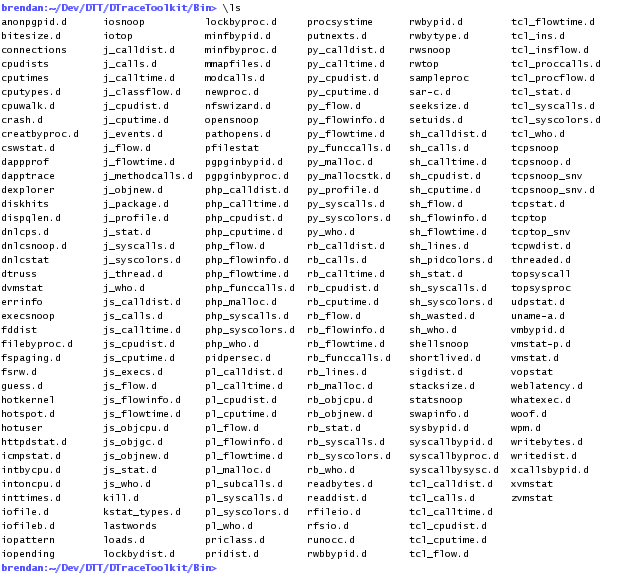 Below I've highlighted most of the new contents, grouped by language that they trace: 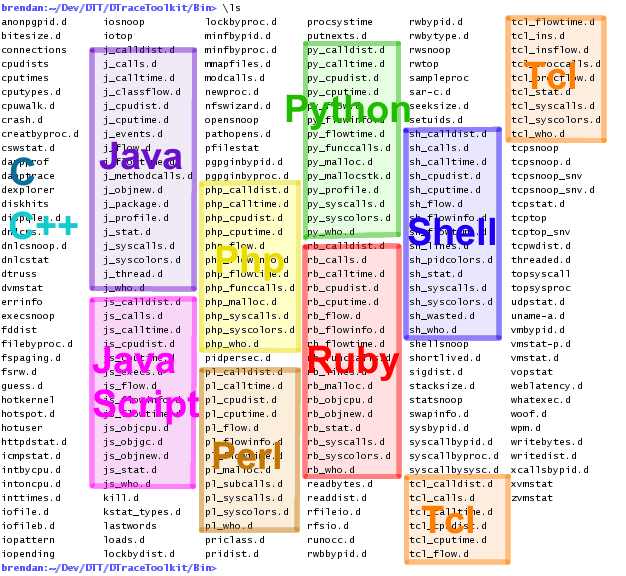 I've placed language scripts in their own subdirectories, each of which include a "Readme" file to document suggestions for where to find the provider and how to get it installed and working. Some of these providers do require downloading of source, patching, and compiling, which may take you some time. Both C and C++ are supported by numerous scripts, but don't have a prefix to group them like the other languages do; I hope to fix this in the next release, and actually have C and C++ subdirectories.

For each language, there is about a dozen scripts to provide:

Now for some examples. I'll demonstrate PHP, but the following applies to all the new languages supported in the toolkit (look in the Example directory for the language that interests you). Here is a sample PHP program that appears in the toolkit as Code/Php/func_abc.php:

For general observability there are scripts such as php_funccalls.php, for counting function calls:

The above output showed that sleep() was called three times, and the user defined functions were each called once, as we would have assumed from the source. With DTrace you can check your assumptions through tracing, which is often a useful excercise. I've solved many performance issues by examining areas that seem almost too obvious to bother checking.

The following script is both for general and performance observability. It prints function flow along with delta times:

Delta times, in this case, show the time from the line on which they appear to the previous line. The large delta times visible show that from when the sleep() function completed to when it began, took around 1.0 seconds of elapsed time. As we'd expect from the source. Both CPU (C) and time since boot (TIME(us)) are printed in case the output is shuffled on multi-CPU systems, and requires post sorting.

A more consise way to examine elapsed times may be php_calltime.d, a script that can be useful for performance analysis:

The exclusive function elapsed times show which functions cused the latency, which identifies sleep() clocking a total of 3.0 seconds (as it was called three times). The inclusive times show which higher level functions the latency occured in, the largest being func_a() since every other function were called within it. There isn't a total line printed for inclusive times, since it wouldn't make much sense to do so (that column sums to 9 seconds, which is more confusing than of actual use).

As a starting point for deeper analysis, the following script adds syscall tracing to the PHP function flows, and adds terminal escape colours (see Notes/ALLcolors_notes.txt for notes on using colors with DTrace):

From that output we can see that PHP's sleep() is implemented by the syscall nanosleep(), and that it appears that writes are buffered and written later.

The scripts are potentially confusing for a couple of reasons; understanding these will help explain how best to use these scripts.

Firstly, some of the scripts print out an event "TYPE" field (eg, "syscall" or "func"), and yet the script only traces one type of event (eg, "func"). Why print a field that will always contain the same data? Sounds like it might be a copy-n-paste error. This is in fact deliberate so that the scripts form better templates for expansion, and was something I learnt while using the scripts to analyse a variety of problems. I would frequently have a script that measured functions and wanted to add syscalls, library calls or kernel events, to customise that script for a particular problem. When adding these other event types, it was much easier (often trivial) if the script already had a "TYPE" field. So now most of them do.

Also, there are variants of scripts that provide very similar tracing at different depths of detail. Why not one script that does everything, with the most detail? Here I'll use the Tcl provider to explain why:

The tcl_proccalls.d script counts procedure calls, here it is tracing the Code/Tcl/func_slow.tcl program in the toolkit, which calls loops within functions:

Ok, that's a very high level view of Tcl activity. There is also tcl_calls.d to count Tcl commands as well as procedures:

(Output truncated). Now we have a deeper view of Tcl operation. Finally there is tcl_ins.d to count Tcl instructions:

There are such large counts since this script is tracing the low level instructions used to execute the loops in this code.

So the question is: why three scripts and not one that counts everything? Why not tcl_megacount.d? There are at least three reasons behind this.

Here is func_slow.tcl running with no DTrace enabled as a baseline:

Now while tcl_calls.d is tracing both Tcl procedures and commands:

Ow! Our target application is running seven times slower? This isn't supposed to happen, is there something wrong with DTrace or the Tcl provider? Well, there isn't, the problem is that of tracing 9 million events during a 3 second program. The overheads of DTrace are miniscule, however, if you multiply them (or anything) by very large numbers they'll eventually become measurable. 9 million events is a lot of events, and you wouldn't normally care about tracing Tcl instructions anyway. It's great to have this capability, if it is ever needed.

It usually takes more time to document a script than it takes to write it. I feel strongly about creating quality IT documentation, so I'm reluctant to skip this step. The strategy used in the toolkit is, by subdirectory name:

Since there were over 100 new scripts in this release, over 100 new example files needed to be written. Fortunately I had help from Claire Black (my wife), who as an ex-SysAdmin and Solaris Instructor had an excellent background for what people needed to know and how to express it. Unfortunately for her, she only had about 4 days from when I completed these scripts to when the documentation was due for inclusion on the next OpenSolaris Starter Kit disc. Despite the time constraint she has done a great job, and there is always the next release for her to spend more time fleshing out the examples further. I'm also aiming to collect more real-world example outputs for the next release (eg, Mediawiki analysis for the PHP scripts).

Stefan Parvu has helped out again by running every script on a variety of platforms, which is especially important now that I don't have a SPARC server at the moment. He has posted the results on the DTraceToolkit Testing Room, and did find a few bugs which I fixed before release.

It has been about 18 months since the last release. In case anyone was wondering, there are several reasons why, briefly: I moved to the US, began a new job in Sun engineering, left most of my development servers behind in Australia, brought the DTraceToolkit dev environment over on a SPARC UFS harddisk (which I still can't read), and got hung up on what to do with the fragile tcp* scripts. The main reason would be having less spare time as I learnt the ways of Sun engineering.

I also have a Sun blog now, here. I'm not announcing the DTraceToolkit there since it isn't a Sun project; it's a spare time project by myself and others of the OpenSolaris community.

The theme for the next release may be storage: I'd like to spend some time seeing what can be done for ZFS, for iSCSI (using the new provider), and NFS.