Off-CPU analysis is the profiling of all thread blocking events (disk I/O, network I/O, locking, sleeping, swapping, etc) with their stack traces, and is complementary to CPU profiling. I covered it in a previous post[1] where I used Linux eBPF to profile the events, but finished by saying I had to drill further on blocked stacks.

To illustrate the limitations of off-CPU analysis, I created the following off-CPU time flame graph while my system performed a file system archive using "tar". The commands (from bcc[2] and FlameGraph[3]) were:

The -u option shows user-mode threads only, excluding kernel threads. Here is the result (SVG):

Click to zoom. This shows stack traces that were blocked and off-CPU, along with the total duration they were blocked as their widths, for a 10 second profile.

Click on "tar" on the lower right (or click the "Search" button on the top right and type in "tar", to find it). See those blocking stack traces? 8.4 seconds total reading files (via vfs_read()), and 608 milliseconds total reading directories (sys_getdents(), etc.). Awesome! This is an example of an off-CPU time flame graph working well.

Many other paths are also not fully explained by these off-CPU stacks alone: eg, paths in sys_select().

Sleeping threads are woken up by other threads. Since the kernel manages this, we can trace these kernel wakeup events and inspect the stack trace of the waker thread at the time of the wakeup.

I've added a new tool to bcc for this, wakeuptime. As with offcputime, it's currently using an eBPF hack[4] until stack support is provided by the kernel. The following wakeup time flame graph was created using:

For differentiation, a different palette was selected. Here is the result (SVG):

See "tar" at the top? Click it. That path shows a block I/O interrupt event. It's the disk I/O completing, and waking up tar. Excellent. The numbers don't quite match the previous flame graph, since I collected these profiles at different times.

Now find "gzip" at the top (top is the target of the waker), it's the right-most column. Click it. So gzip was woken up by tar doing a write. This makes sense, as the archive was actually:

gzip also appears at the bottom, as responsible for waking various other threads, although I think this is more to do with pending interrupts being processed (the handle_irq path), and not gzip-specific. I may improve how this is presented in a future version of the tool.

Let's combine the off-CPU time flame graph with the wakeup time flame graph. I've done this using another new tool, offwaketime, which combines these stacks in kernel context for efficiency. 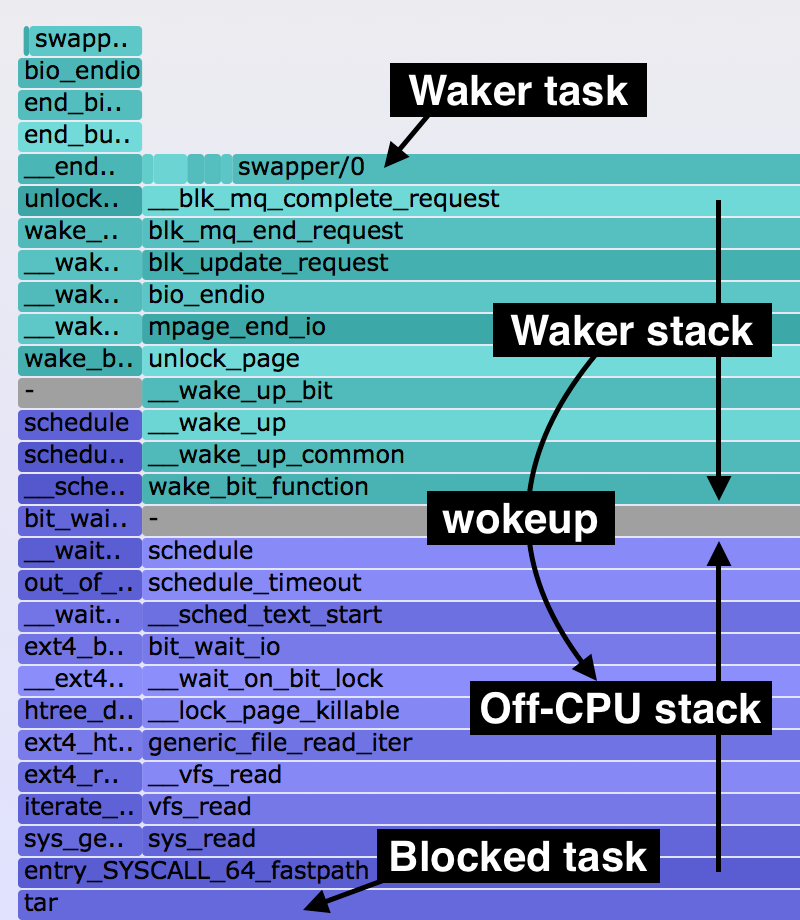 Since we're back to having the target thread at the bottom (like the off-CPU flame graph), find "tar" as a bottom frame. Click it. You can see the off-CPU stack and then the wakeup stack, illustrating more of how block I/O is processed.

You can also find "gzip" as a bottom frame. The very top frame is "tar", the wakeup task. Their stacks are shown together.

To read these off-wake time flame graphs, begin at the bottom frames to find the blocked tasks, then continue reading bottom-up. The first stacks show the primary reason the threads blocked (off-CPU), and the second stacks show the secondary reason (wakeup). On the very top is the waker task names.

Because of limitations in my eBPF stack hack, this offwaketime program truncates waker frames to a depth of 10. This limitation will be removed in future versions, which should also include user-level stacks as well, for application context. Since tar and gzip are simple programs, we can guess what they are doing without their user-level stacks. For large applications, however, the kernel context alone may be ambiguous, and we may need the user-level stacks to make better sense of the flame graph.

Another limitation is that one wakeup stack may not be enough to explain the source of latency, when the waker thread was blocked on another thread. An example in this SVG is "sshd", which was blocked on the kernel worker thread "kworker/u16:2" (which itself isn't present in the flame graph, because I excluded kernel threads using offwaketime -u). In an upcoming post, I'll show what happens when we include kernel threads, and also multiple waker stacks.

I'm also experimenting with how best to associate the waker stack with the off-cpu stack. In my current version, the newly woken thread checks an eBPF map where waker stacks are stored by thread ID. This works fine, but there may be room for improvement, especially with how timing is measured and presented.

I accidentally caught cron executing while collecting examples, and saw this (original SVG): 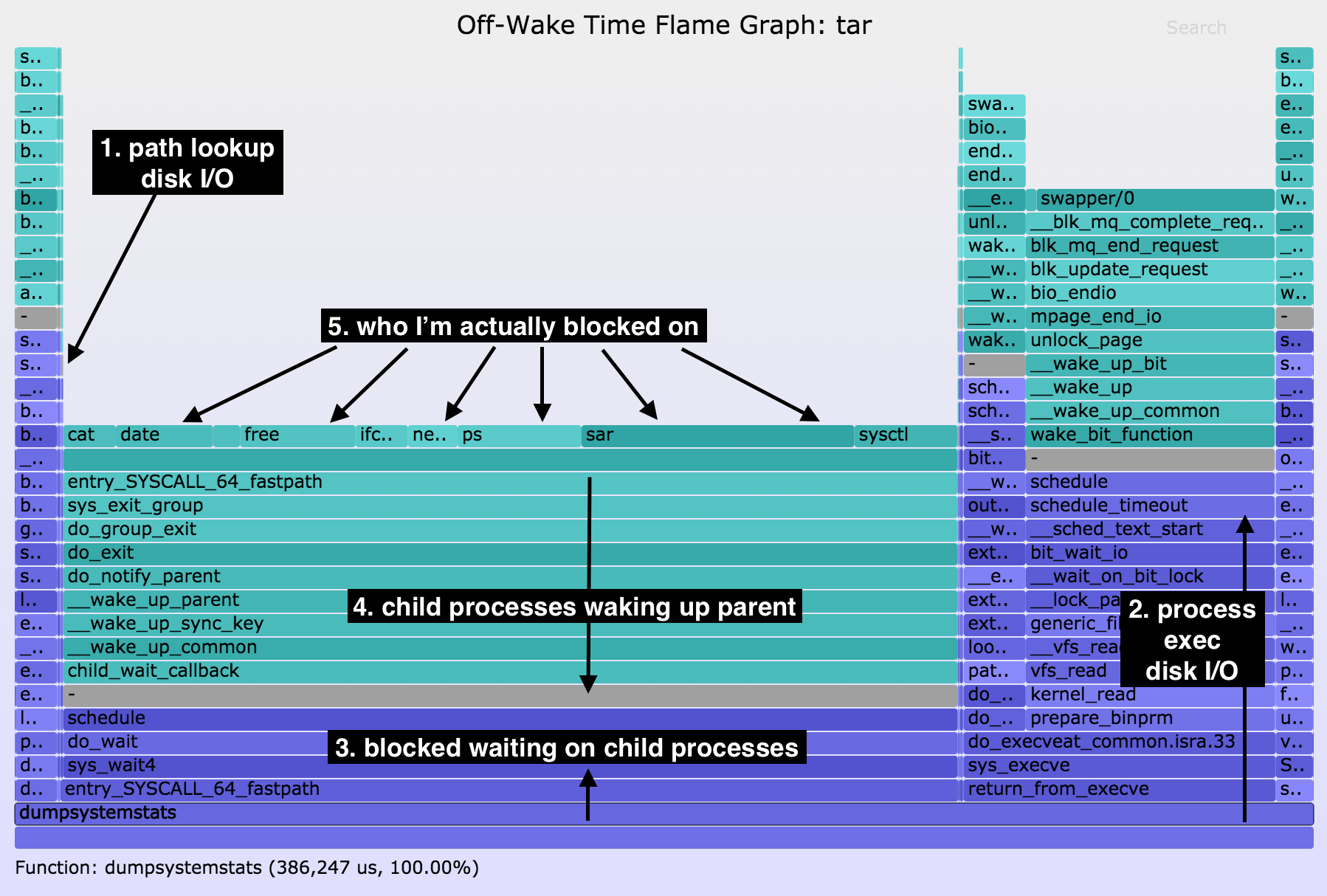 This is a "dumpsystemstats" script gathering various system statistics. Since I had flushed the file system cache, many of the processes called were no longer cached, and needed to be read from disk.

The flame graph paints the full picture of why dumpsystemstats took as long as it did to execute. And by mousing over the original SVG, I can read the times and quantify each path. Explaining the enumeration:

Not labeled here is the thin tower on the right, for sys_newstat() taking 11 ms. The total run time of dumpsystemstats, 386 ms, can be explained.

I should note that the ordering I used for this enumeration may reflect the actual order of execution, or it may not. We don't know which towers were executed before which other towers, as the x-axis is an alphabetical sort, not the passage of time (that's flame charts). However, for the primary use case – provide a breakdown of time – the ordering is not important. As a performance engineer, this has already identified many areas to work on, and quantified them.

There are now four types of flame graphs for investigating time spent by threads:

The last two were introduced in this post, along with versions implemented using Linux bcc/eBPF: wakeuptime and offwaketime. The current versions of these tools have various limitations, including only kernel stacks. These limitations should be removed in the future, as eBPF and bcc continue to be developed.

The last three can solve many issues involving blocking events and off-CPU time, but not everything, as the wakeup stack may not be sufficient. Despite this, they should still be a useful addition to a performance analysis toolbox, as one way to analyze all blocking events: I/O, locks, paging, swapping, sleeps, etc.

Thanks to Deirdré Straughan for edits and suggestions.