I wouldn't dare run strace(1) in production without seriously considering the consequences, and first trying the alternates. While it's widely known (and continually rediscovered) that strace is an amazing tool, it's much less known that it currently is – and always has been – dangerous.

strace is the system call tracer for Linux. It currently uses the arcane ptrace() (process trace) debugging interface, which operates in a violent manner: pausing the target process for each syscall so that the debugger can read state. And doing this twice: when the syscall begins, and when it ends.

In some cases this doesn't matter. Your application might be completely broken to start with, or you could be running it in a test environment where speed is not a concern. In production, you'll want to be really careful, and think though the consequences (eg, could this cause the target to fail-over due to exceeding latency thresholds?). Better, look for alternates to try first, like Linux perf_events.

The performance overhead of strace is relative to the system call rate it is instrumenting. To put something of an upper bound on it, here is a simple worst-case test:

Now with strace (here I'm tracing a syscall that is never called, accept(), but we pay the overhead anyway):

That's 442x slower. It is worst-case, since dd(1) is performing syscalls as fast as it can.

How To Learn strace

There's much you can learn about interpreting strace output. The following two steps should get you started with key system calls.

You should know what the following 12 key system calls do, which you'll see regularly in strace output. Test your knowledge! How many of these do you know? Mouse-over for answers.

Click here to reveal all. Each syscall has a man page, so if you are at the command line, it should only take a few seconds to jog your memory.

There are variants of these syscalls, so you may see "execve" for "exec", and "pread" as well as "read". There should be man pages for these, too.

You can practice and learn strace by aiming it at some basic commands: ls(1), sleep(1), ssh(1), etc.

Lets strace the venerable ls -l as our first example. We'll list /etc so that there are plenty of files to examine, and the output is mostly what you expect (listing files) and not program startup and initialization.

The execve() variant is used to run /bin/ls, then libraries are pulled in. There'll be multiple groups beginning with an open() of a /lib* location and ending in close().

As an example of reading a single line: take a look at the open() line, and also the open(2) man page. The man page summarizes this syscall as:

It also explains these arguments in detail, and the return value. So, our "pathname" was "/etc/ld.so.cache", and the flags were O_RDONLY|O_CLOEXEC. It returned 3, a file descriptor for later use with other syscalls.

Later in the output the real action begins:

This opens /etc and reads the directory entries (getdents()), then for each file it calls lstat(), a stat() variant, and two extended attribute varients: lgetxattr() and getxattr(). getxattr() is called twice, once for each namespace: see its second argument.

After collecting all this file information, ls(1) begins printing it out, sorted:

The output is a little messed up since ls -l and strace are writing to the same terminal. The write() syscalls are printing a line of output for each file, and ...

WTF?? Why is ls(1) running stat() on /etc/localtime for every line of output?

A quick search online (I would have hit up the ls(1) source next) explained the problem seen here: my TZ environment variable is not set. Setting it eliminated those stat() /etc/localtime calls.

So I just found a performance win with this simple example. Oh, um, I meant it this way, of course!

And with the fix:

I just improved performance by 23% (2.753s vs 3.562s). Not bad. (I wouldn't get too excited about finding and eliminating stat()s, though, as they are a fast syscall, and wins are not usually this high.)

This is a good example of the type of performance issues that strace is good at identifying: problems of the load applied. While we discovered it by fishing around with strace, this would also be found by following a performance methodology: workload characterization, for system calls.

Since it can distort time measurements so severely (although it does have a "-O overhead" option, and heuristic, to try to compensate), strace is not so good at determining performance issues involving latency. It also is of much less use outside of the syscall interface, for example if the performance issue was deeper in the kernel or application.

There is a possible con: in the past, strace has had bugs which can leave the target process, or its followed children, in the STOP state (eg, here, here). This could cause a serious production outage, as the application is now frozen mid-flight. If you realize this immediately and can fix it (kill strace, then kill -CONT the process), then you may avoid a serious outage. However, you may still have caused a burst of application requests with multi-second latency (outliers), depending on how quickly you typed in the kill command.

If you'd like to write a blog post about how awesome strace is and show a case study of its use, then great, but please copy the above WARNING bullet point.

Since the following appear to lack overhead warnings, I added a confirmation box on the links:

These can be useful as they show case studies for real issues, and also provide different perspectives based on each author's area of interest and expertise for applying strace.

If you'd like to learn more about strace internals and ptrace(), I recommend: 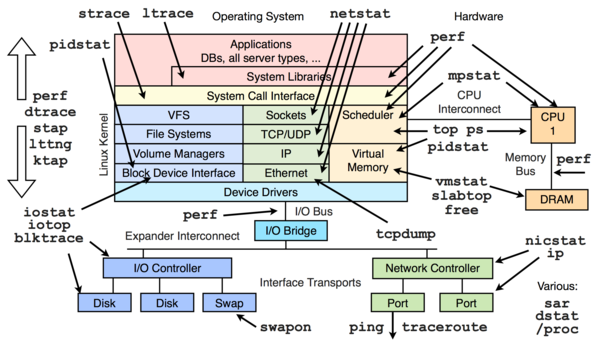 There are many articles and posts on strace(1), as well as tcpdump(8) and top(1), but few on harder Linux observability tools and frameworks, like ltrace (library trace), perf_events, tracepoints, kprobes, uprobes, etc. I joked about this in my SCaLE12x keynote, showing a simplified Linux internals diagram composed of only top, strace, and tcpdump!

strace has limited visibility: (an instrumentable version of) the syscall interface. My Linux performance observability tools diagram on the right shows the scope of strace vs other tools. Now, much can be inferred about kernel activity from the syscall requests, but there are plenty of areas for which you have no direct visibility. Browse the diagram to see the other tools you can use to go beyond strace.

I usually skip strace and go straight to these other tools, like perf (perf_events) or one of the other in-development Linux dynamic tracers. These give me deeper visibility, lower overhead, and customizable output. Although, sometimes the quickest route is just firing up strace, and I will, if the overhead is acceptable.

strace(1) is a great tool, but the current version (using ptrace()) can slow down the target severely. Be aware of the overhead strace causes, and consider other alternates for Linux that use lower-cost buffered tracing. These include perf_events, sysdig, ktap, and SystemTap. Many of these also allow custom kernel summaries, reducing overheads further.

Linux 3.7 introduced perf trace, a buffered strace-like subcommand for perf_events, which was introduced as an "alternate to strace". There is also sysdig, which allows custom filters and output. It's quite possible that in the future strace will become a wrapper to one of these, and all my warnings about the overheads will be out of date (it won't mean that overheads can be ignored, though!).